In Amazonia, accumulated deforestation reached 513,016 km² between 2000 and 2018. The triggers of this process, which vary in importance and type in each country, are associated with legal or illegal extractive activities (mining, hydrocarbons, wood, fauna and flora), agricultural activities, and infrastructure projects (roads, dams, among others).

Map: Deforestation in Amazonia
Forest loss varied throughout this period. In the first twelve years, the average annual deforestation was higher (30,854 km²/year) than for 2012-2018 (23,796 km²/year). The peak was recorded in 2003, when more than 49,240 km² of forest was razed. From then on, rates of forest loss began to decline, in 2010 reaching just over 18,643 km², the lowest level for the whole period. However, since 2015 deforestation has begun to rise, and in 2018 more than 31,269 km² of forest were cut down, the equivalent of one third of Portugal, which puts that year in fifth place in terms of loss for the period studied. 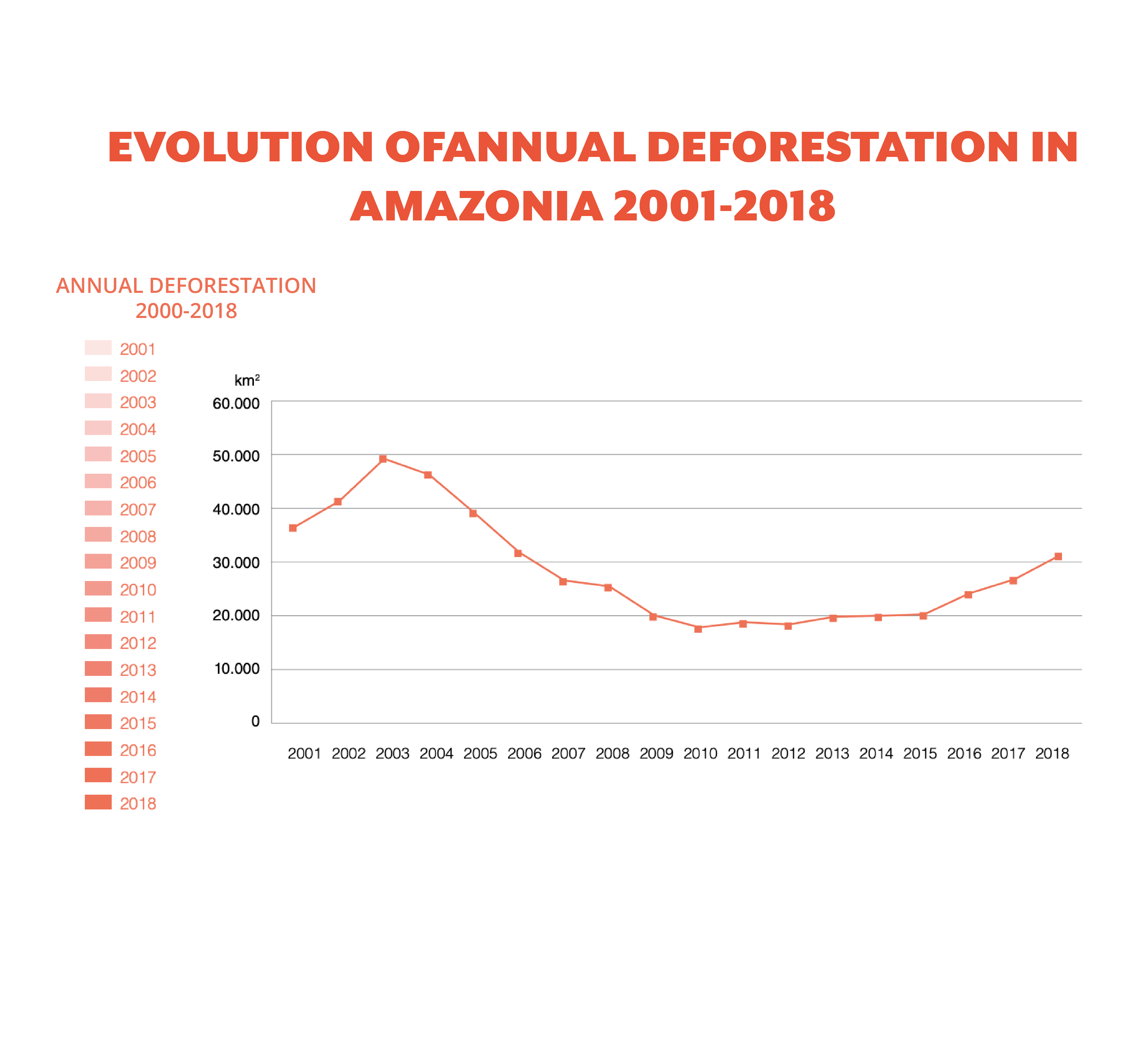 Although Perú has signed up to international initiatives to reduce deforestation, in practice one of the biggest challenges has been the lack of connection between national or regional policies, strategies and actions and those at the local level, which generate more immediate changes in land use.

Ecuador lost, between 2001 and 2018 the country lost 7,006 km² of forests in its Amazon region, the equivalent of almost 19 times the area of its capital, Quito.

Colombia, in the period 2000-2018, saw between 600 and 1,400 km² of its Amazon forest transformed annually by the advance of agricultural activities (mainly for pasture), the expansion of road infrastructure, oil activity, and land grabbing, according to official figures from IDEAM's Forest and Carbon Monitoring System.

In Brasil, the Amazon is suffering a rapid and intense process of deforestation. In almost 50 years, the country has lost 18.9% of its original forest (798,629.5 km², equivalent to almost twice the size of Germany). No other nation has fallen so much in such a short time.

In Bolivia, the data also show the speed with which deforestation is advancing in its Amazon region. A third (21,000 km²) of the 72,000 km² deforested in fifty years in the Bolivian Amazon was cleared between 2011 and 2018. In this period, deforestation occurred at an annual rate of 2,600 km², the worst figure in decades according to a study by the Fundación Amigos de la Naturaleza (FAN).

In Venezuela, the absence of official figures makes inspection and control difficult. However, data from RAISG reveal that between 2000 and 2018 at least 4,000 km² of Amazonian forests were lost due to agricultural expansion and this, together with mining, mainly illegal and expanding uncontrollably, have caused important changes in the region over the past two decades. 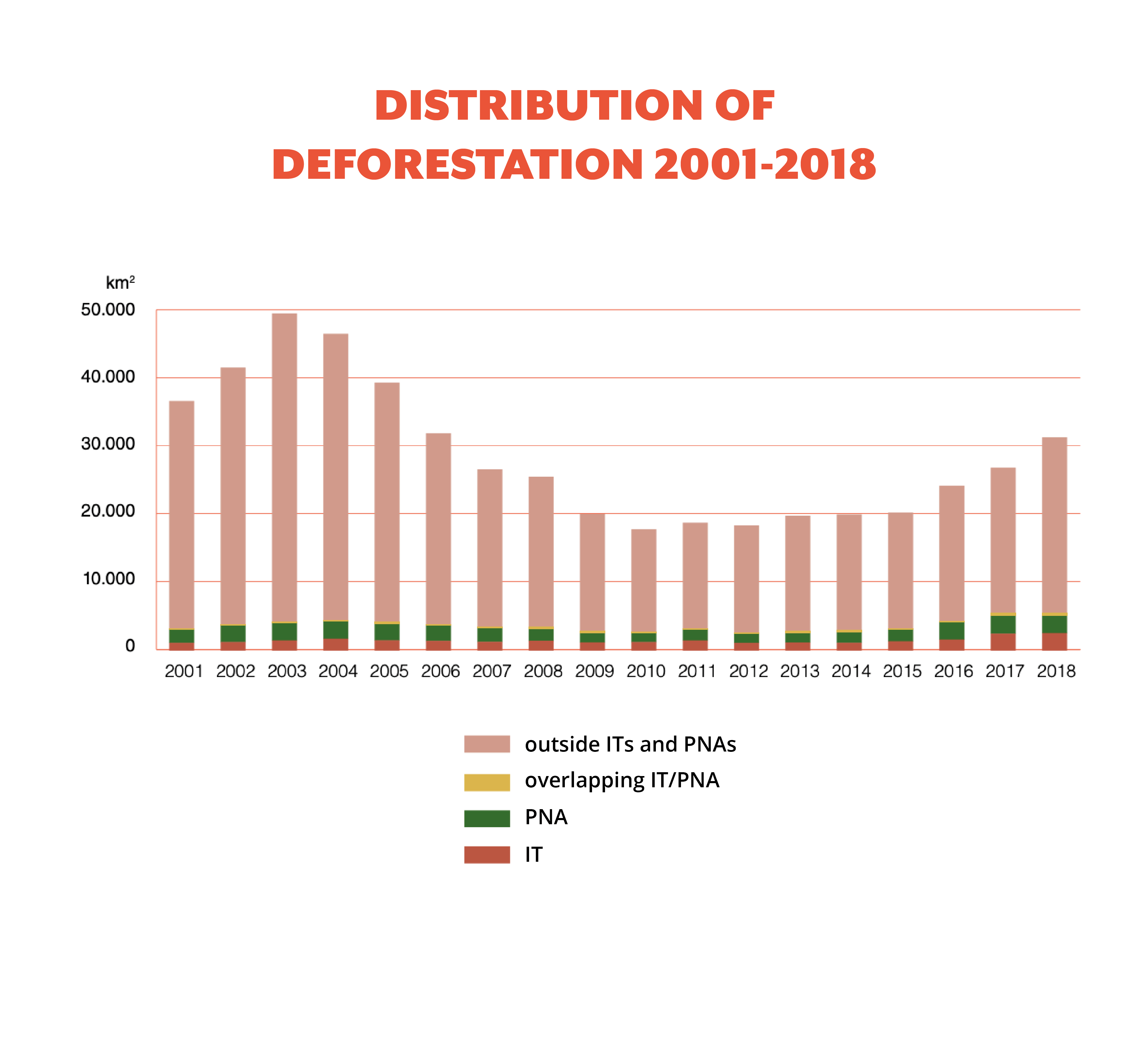 Most of the deforestation (87.5%) took place outside PNAs and ITs, highlighting the role these areas play in protecting forests. However, 5.3% of forest loss occurred within ITs, and 7.5% within PNAs. In fact, the trend within ITs and PNAs goes against the regional trend.
In this sense, the annual loss of forest in protected areas was 3,369 km² between 2000 and 2012, while between 2012 and 2018, this figure increased to 3,984 km², with high points in 2017 and 2018. Between 2001 and 2018, Perú lost more than 22,848 km² of its Amazonian forests, according to the Ministry of the Environment (2019)7 and the new RAISG analyses. This was mainly due to the expansion of areas for agricultural use, illegal mining, the proliferation of illegal crops, and the expansion of areas for livestock.

7. Synthesis maps of pressures and threats